Death By Impatience (Or, the 4 P’s of Evaluating New Technology)

I have two TVs in my house. One upstairs, one down.

Three weeks ago, I went from watching Netflix through Apple TV (which worked perfectly) while running on the treadmill downstairs, to scrolling through Amazon Prime On Demand shows on my main TV.

It started playing and the resolution was horrific. Moments later I got the following message: 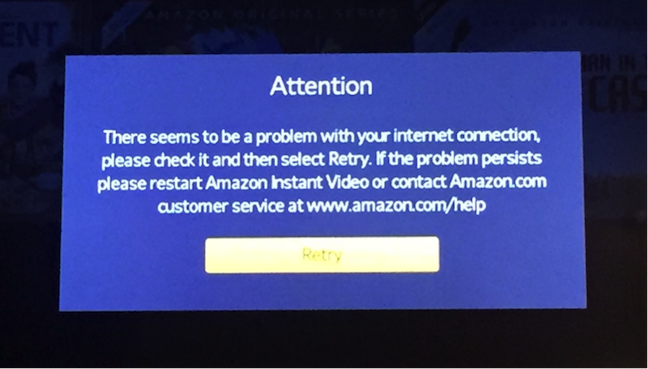 This wasn’t the first time this had happened with Prime streaming. I restarted and got the same message three more times before I gave up.

I haven’t been back to watch anything through Amazon Prime since.

Sure, it might not have been Amazon’s fault. But I don’t want to take the time or energy to look into it. I have many other options that rarely have issues.

When Netflix started streaming movies in 2007 it was transformational. It was also unreliable and buffered as often as it played. But it didn’t matter. This was cutting-edge stuff so consumers stuck around. We were patient.

Nine years later, expectations are higher and patience is in short supply.

We now want to immediately know what a new technology is for, and who is using it. And it has to work well right out of the gate. Otherwise it faces the threat of imminent death.

We all know the four P’s of marketing, but I believe there are also 4 P’s of evaluating new technology in 2016.

1) Purpose: What does it do, who is it for, and how does it serve a different need than current platforms or technology? Google+ comes to mind – there was nothing wrong with it at launch, but it was an alternative to existing and familiar platforms that already work equally well. If not better.

2) Performance: In the launch-and-learn era, betas are acceptable. But be warned – too many bugs or glitches that impact the user experience can be an early fatal blow. There are plenty of apps I used just once then quickly discarded for good.

3) Popularity: When was the last time you downloaded an app that didn’t have a star rating or any reviews? There are simply too many new launches and too little time for us to waste on something no one is using yet. And we certainly don’t want to learn to use a new social platform that may never be fully embraced by our peers.

4) Potential: People need to not only see the immediate purpose but also what the future may hold for a new technology. Virtual reality and 360 photography have instant applications but also hold endless opportunities that are easy to envision.

Eventually, the tech bubble may again burst, not because of the lack of groundbreaking ideas, but because new technology is no longer given time to go through the awkward teenage phase – trying to determine what it is, who it’s for, and it’s ultimate place in the world.

But I will give Amazon Prime On Demand another shot. Just as soon as I find the time.